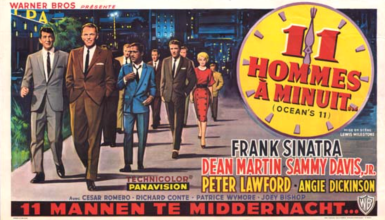 As mentioned on Tuesday, the Now Playing Podcast schedule has been updated through the end of the year, and the highlight (for me at least) is the Ocean’s Eleven Retrospective Series.

I talked with the hosts — Arnie, Jakob and Stuart — covering the series, below is a bit from the story posted on the Venganza Media website:

Q: These movies were hard to miss, what are your Ocean’s memories?

Stuart: I have only seen the first George Clooney movie, and my memory of it is vague but pleasant. I tend to like series’ with a long history to them.

Jakob: I’ve actually seen that first one a handful of times and I remember almost nothing of [Ocean’s] Twelve. I can only hope the sequels have that party vibe of Ocean’s Eleven. That’s why we decided to transition from 2014 to 2015 with these films. Everyone wants to ring in the New Year with a great party.

Stuart: I look forward to seeing the Rat Pack define the Vegas of 1960, before the town and the franchise become more of a theme park attraction with the contemporary films.

Arnie: I actually stayed at the Bellagio, and while I didn’t encounter Terry Benedict, I did get to watch the fountain show — with Ocean’s well on my mind. I was itching to re-watch the series after that trip.

Strangely the best Vegas connection I had wasn’t from the Ocean’s series, but from The Stand. The crucifixion scene was filmed on Fremont Street in Vegas and some of the signage was very familiar!

Read the full story here and check out the Ocean’s Eleven retrospective, starting Dec. 16 at NowPlayingPodcast.com.