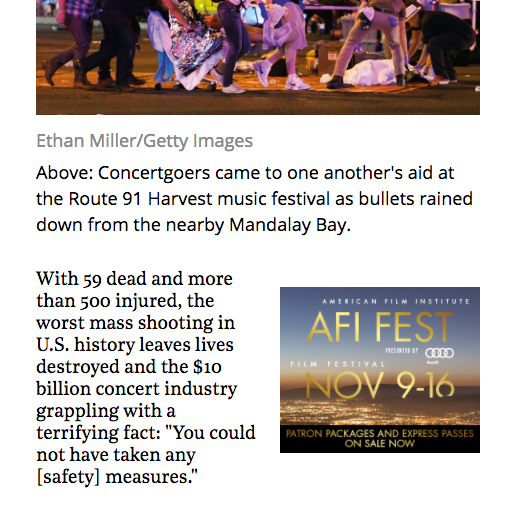 Live music, especially outdoor concert festivals, mean so much to the Las Vegas economy. In the wake of the Oct. 1 shootings at the Route 91 Harvest Festival, a city that exists purely as an entertainment destination is faced with the dual tasks of healing its wounds while reassuring the visiting public that they are safe in its casinos, arenas, and outdoor venues.

In this week’s issue of The Hollywood Reporter (on newsstands and online), Senior Staff Writer Ryan Parker and I take a look at the potential impact of Stephen Paddock’s attack on the Strip, from the perspective of a Las Vegas show producer and a performer, as well as industry analysts and the former Aurora, Colorado police chief, who investigated the 2012 Dark Knight Rises theater shootings.

In the immediate aftermath of the attacks, a number of Las Vegas shows canceled their Oct. 2 performances, and the band Cake, which had been scheduled to perform Oct. 5 at The Cosmopolitan of Las Vegas, postponed their show to February in response to the tragedy. The Strip is attempting a return to normalcy, although nothing will feel normal here for a long time.

On a personal note, I wish my first article for The Hollywood Reporter had been published under better circumstances, but I’m proud to have gotten the opportunity to write for a publication that I respect more than any other in the industry.