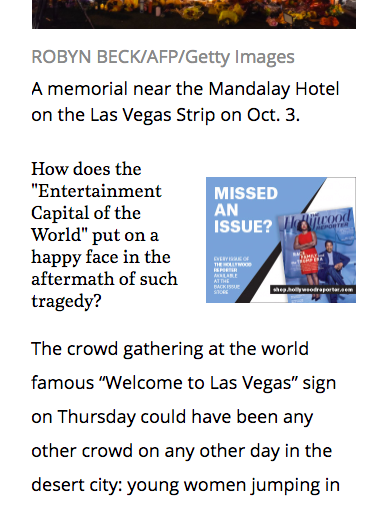 How does Las Vegas put on a happy face in the wake of this week’s tragedy? It’s a dilemma I examine in my latest piece for The Hollywood Reporter.

As the Strip struggles to find normalcy — with an active crime scene at the Route 91 Harvest festival site and multiple memorials springing up along Las Vegas Boulevard – I went down to the “Welcome to Fabulous Las Vegas” sign, where Elvis is still putting on a show despite all that’s happened.

“We have to become normal again and start to do the things we normally do to make Vegas happen,” explains Elvis impersonator Mark Rumpler, who has been down at the sign all week in his white jumpsuit and sunglasses.

The city’s chief concern, in the meantime, is assuring the public that its casinos, hotels, and concerts are safe. But Steve Adelman of the Event Safety Alliance says there’s a risk of overreaction to a tragic scenario that no one could have predicted.

“We’re talking about Las Vegas, which already does more than just about every other American city to keep its guests safe and secure,” he says.

You can read the article now on The Hollywood Reporter website.